Home Safari What Is The Best Time For An African Safari In Kenya And Tanzania?
SafariUncategorized

What Is The Best Time For An African Safari In Kenya And Tanzania?

There is a stretch of Africa that is relatively unrivalled in terms of uniqueness and grandeur, known as the Serengeti. Relatively untouched by the more destructive inroads of industrial development, this epic part of our planet is one of the Seven Natural Wonders of Africa.

The Serengeti is a truly marvelous location for African safari holidays. This article will provide you with some important information on how to get the most out of a potential tour of this utopia – how to ensure you encounter as much marvel and splendour as you desire.

Where is the Serengeti?

Stretching from the north of Tanzania, all the way to southwest Kenya, the Serengeti covers almost 18,641 square miles. The Kenyan region of this area is called Maasai Mara. The Maasai people are legendary for their strong warrior tradition and cattle-herding. With around 70 large mammal and 500 bird species to be sighted, the Serengeti is one of the most powerfully vivid locations for a wondrous safari tour.

The Maasai People, a proud and noble people with a supremely beautiful culture.

Is Maasai Mara Different from The Serengeti?

There is no direct route between the Mara and the Serengeti. A person wanting to travel from the Mara into the Serengeti could go through Nairobi, onwards to Arusha and from there enter the Serengeti.

Geographically, the two different sections of the Serengeti are the same ecosystem, but Maasai Mara is considered to be the most wonderful part of the best African safari. This region, officially known as the Maasai Mara National Reserve, hosts a myriad of noble creatures, such as Tanzanian cheetahs, African leopards and Maasai Lions.

It covers an area of around 583 square miles, a home to stunning views, a lively and colourful range of wildlife and grasslands that seem to stretch on forever. Add the ‘Great Migration’ to the list, and you have a recipe for one of the ultimate natural world safaris.

The peaceful nomads of the Serengeti on their tireless yearly mission

The Best Time to Visit Maasai Mara and Tanzania? The Great Migration

The Great Migration is something that has to be seen to be believed. This natural phenomenon is an unparalleled epic quest in life’s great adventure, a must-see for anyone considering African safari holidays. Every year, around the same period of time, the circuit-like migration of the great wildebeest exodus begins around December in the Ngorongoro Conservation Area, located in Tanzania’s southern Serengeti. This enthralling movement then sweeps towards the Serengeti National Park, moving northbound towards the Masai Mara reserve in Kenya.

February marks the calving period, during which time the wildebeest will remain in the southeastern portions of the ecosystem, in order to graze and bring around half a million calves into the grassy plains. This whole process lasts around three weeks.

However, those wishing to witness the most dramatic period of the Great Migration should venture forth during the Dry season, from late June until October, with the most wonderful period of the migration occurring during June and July when the wildebeest migration successfully enters into Maasai Mara. 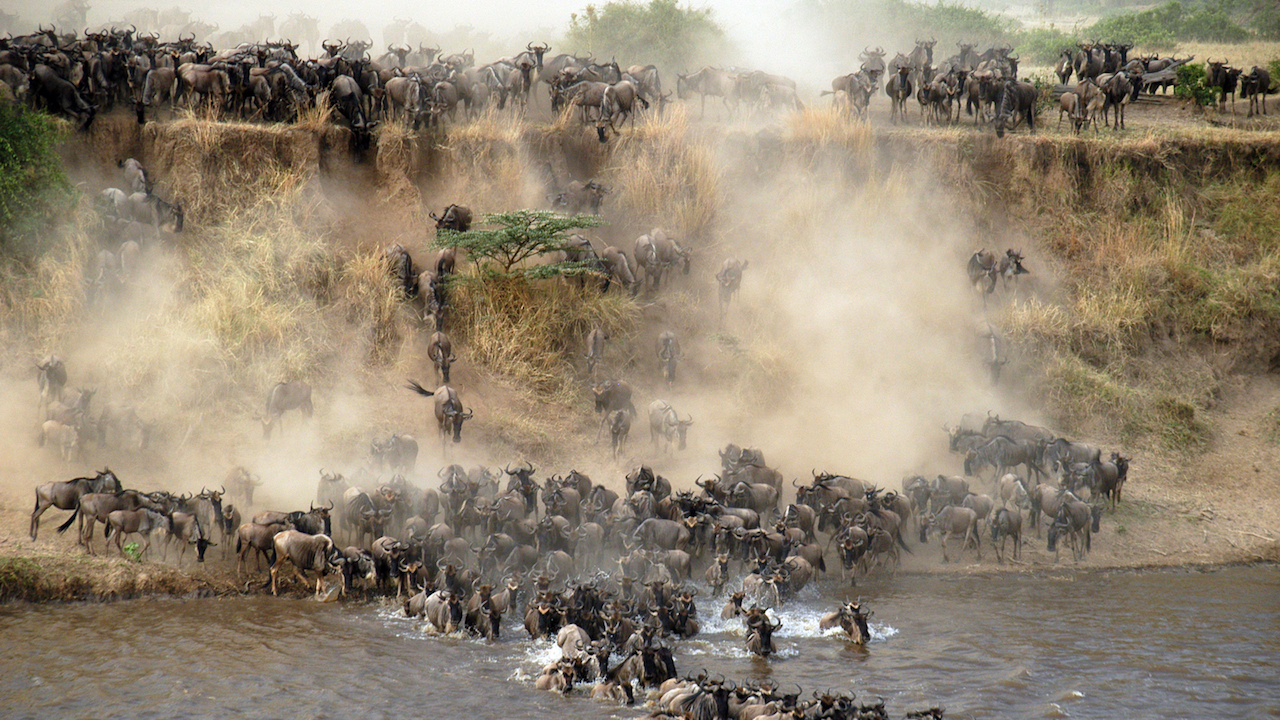 Breath-taking moments like this are only witnessed in the Serengeti

Kenya enjoys a pleasant climate of a largely tropical nature. This is due to its direct proximity to the equator. The weather varies significantly, however, according to the altitude. Being a very hilly region of the world with many mountains, temperatures can drop by 3.5° for every 1,000 feet you ascend. Those considering a spot of Kenya tourism should certainly take this factor into account when planning their destinations.

While Kenya’s temperatures range on average from around 68°F to 82°F, the closer you get to the coast, the warmer it gets. Kenya’s beaches stay heated with high humidity throughout the year, which is constant unless the monsoon winds are adding some temperament.

Its direct positioning on the equator means that Kenya does not truly possess legitimate winters and summers. Instead, this country enjoys what are known as Dry and Wet seasons.

Dry Season – June to October
– As mentioned in the descriptions of the Great Migration, the Dry season occurs between June and October. It is during this period that Kenya sees its coldest times. Again, altitude of course comes into play when determining how cold one will be during their Kenya safari. You can expect to do a bit of shivering up in the higher altitudes, with temperatures hovering about a low 50°F. You’ll obviously need to pack warm, insulated clothing if attempting a safari tour in the mountainous regions.

Wet Season – November to May
– During the warmer Wet Season, you can expect to have a less breezy time up in the mountains, with temperatures ranging between 75°F and 81°F. Down below, things are going to start heating up nicely at around a standard 86°F.

o November and December – This period is categorized by ‘Short Rains’. Safari in Kenya during this period will be constantly visited by gentle to heavy rain, bringing a very romantic element to your trips.

o January and February – The beginning of the year has less rain, with a more arid sensation becoming the norm. Rainfall is still a thing though, just less predictable and frequent.

o March, April and May – Here start the ‘Long Rains’, where the downpour commences in full swing. You can now expect rain on a daily basis – but don’t worry – it rarely lasts the full duration of the day. Clouds will now begin swarming the skies, especially at higher altitude areas such as the highlands.

Apex predators like this male Lion are a common sighting

What you can Spot

The wildebeest migration may be one of the highlights of African safari holidays in the Serengeti, but there are still many other legendary animals to look out for in abundance in a place regarded as one of East Africa’s most acclaimed game regions.

With so many wildebeest roaming about, it’s obvious that a massive population of predators is going exist beside them. With over three-thousand lions, one-thousand leopards, and around eight-thousand spotted hyenas, you won’t need to crane your neck far to spot someone that would love to have you for dinner.

As for the more timid creatures, there’s no shortage of warthogs, gazelle, waterbuck and zebras.
One should do some research into the grazing patterns and locations of the various animals in the region. For example, wildebeest enjoy shorter grasses, while zebras find taller grass more appealing. However, every one of your safari-based wishes will be granted by employing one of the well-trusted African safari packages.

The Serengeti is a wondrous and enchanting natural sanctum to adventure through, regardless of the angle you wish to take. Whether you enjoy roughing it, or you prefer a luxury African safari, be sure to plan your journey as concisely as possible.

If Money Were No Object: The Most Opulent Holidays on Earth

6 Smart Hacks To Save Money While Travelling

Couchsurfing 101: Everything You Need to Know