Arctic Blast in NYC Continues to Cause Chaos

The arctic blast that swept through the eastern end of the US, as well as Canada brought with it some of the lowest temperatures both countries have ever seen, heavy snowfall and gale-force winds.

These hazardous weather conditions put residents at risk of frostbite and other weather-related dangers. It has been reported that as many as 19 people have died across the US as a result of these extreme conditions.

Airports were heavily affected throughout the US but the most affected were undoubtedly JFK Airport in New York and Charleston Airport in South Carolina. Over 3400 flights were delayed going in or out of the US by Saturday the 6th of January, causing extreme havoc and stress for many travellers who were trying to get back home for work before Monday morning. 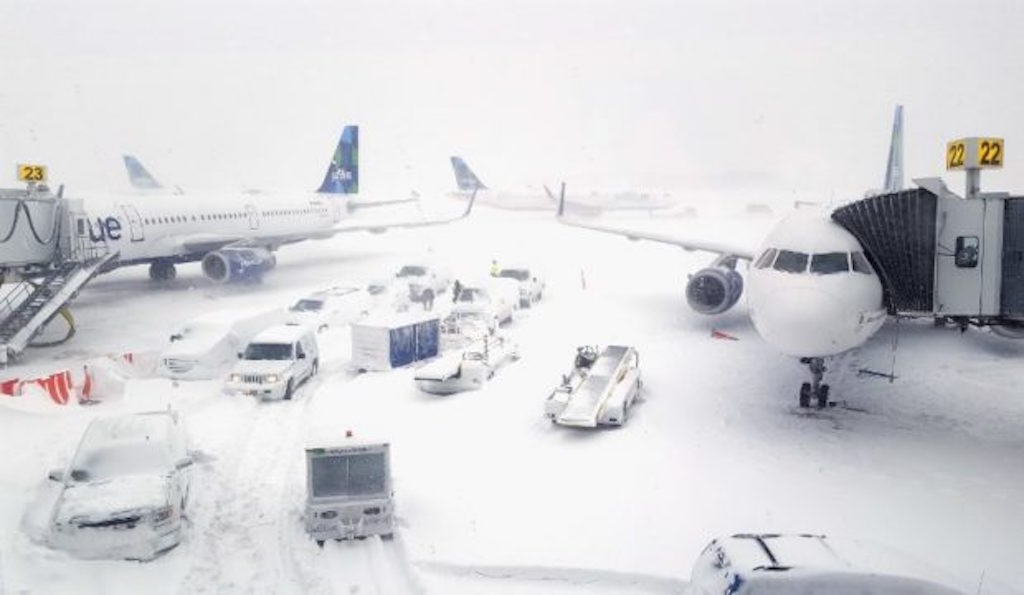 JetBlue airplanes wait at the gates outside terminal 5 at JFK International Airport on January 4, 2018.

JFK Airport struggled with a number of issues over the weekend. Many planes stood still for hours on the tarmac, as they waited for gates to open, leaving many travellers restless and frustrated. There were further delays when it came to claiming baggage and the weather did disastrous damage to an array of airport equipment.

Hopes of things getting better at JFK were dashed when flooding took place at the airport on Sunday, 7th of January. The flooding was caused by a water main breaking, causing further chaos at the already pandemonium-filled airport. As the main broke, water fell over a large area in JFK’s Terminal 4. Terminal 4 became unusable and all international flights out of Terminal 4 were delayed and had to be transferred to other terminals.

New York’s Fire Department was dispatched in order to help deal with the large amount of water in the terminal. The flood damaged expensive airport equipment and seemed like the final nail in the coffin after the airport’s misfortune with the disastrous weather over the weekend.

Looking ahead, the weather does seem to improve this week and flights should get back on track fairly soon, with Terminal 4 becoming usable again, as soon as the last of the damage control is done.

Is Jet Lag Real Or Is It All In Your Mind?

Californian Man Dies While Hiking In The Australian Outback

Plane Loses Control And Skids Off Runway In...

5 Dirtiest Items In A Plane

Disneyland Is Set To Open Their First Ever...

Hostelworld Announces The Best Hostels In The World